What can be more thrilling about the end of a Euro 2016 group, than a clash between the teams sitting in the first and second place? Even better, one of them is the current holder of the tournament, while the others are generally viewed as one of the pleasant surprises of this year’s tournament. Croatia, the team we were referring to above, managed a win over Turkey on day 1 and a 2-2 draw against the Czech on day 2, after leading 2-0. The second game is a perfect example of Croatian football this year: they showed their strengths (pace, technique, creativity, team play) as well as their weaknesses (defensive strength and lack of concentration) in the same game. 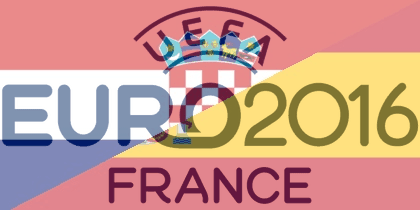 Led by famous players like Luka Modric (Real Madrid), Ivan Rakitic (Barcelona) or Mario Madzukic (Juventus), the Croatians are almost sure to qualify from the group and will be a tough nut to crack for anyone. A point against Spain can guarantee them 2nd place, while a win will send them top of the group. Meanwhile, the Spanish team requires little to no introduction. Although they don’t have the same core team they had 4 years ago (missing Casillas, Xavi, Puyol, Torres), their new team looks very good and contain some great new players, like Morata or Nolito. They managed a very convincing 3-0 win over Turkey on day 2 and a 1-0 victory over the Czech. They do seem like favorites against Croatia, but anything can happen. The trouble with betting on this game is that the Spanish are already qualified; meaning that their coach might not field the best 11 available and the players might lack some concentration. A great bet would be both teams to score, or even Croatia to score and over 2,5 goals. Avoid betting on a clear winner for this game, because anything can happen in these last games of the group. Good luck! Both Teams To Score: Yes 2.30 or 13/10 Total Goals: Over 2.5 – 2.75 or 7/4