One of the most eagerly anticipated games on the top side of the program is that between Croatia and Portugal. It has absolutely anything you can wish for: attacking football, star players, spectacular games, and two teams on completely different statuses. Croatia comes as the surprise winners of group D, while Portugal managed to finish on 3rd place in group F, although they were heavy favorites. How will the two contenders fare against each other? 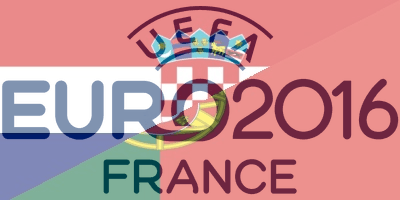 Croatia was one of the most pleasant surprises of this year’s European Championship. They should have ended their group with 9 points, but the Czech managed to snatch a 2-2 draw after trailing 0-2. They showed great football in all their games, culminating with a 2-1 win over Spain. The win was even more impressive because they turned the game around. Modric, Perisic, Kalinic and many others proved time and time again they form a great team – one that can even feature in the final. On the other hand, Portugal managed to disappoint in all 3 games. After a 1-1 draw against Iceland, they played in a goalless draw against Austria and in the most spectacular game of the tournament so far : 3-3 against Hungary. Their defense proved weak in all games so far, and their attack, although featuring global superstars like Ronaldo and Nani only started working in the last game of the group. They surely have to step up their game in the knockout rounds if they want to progress. Their opponents are nothing to be scared of on paper, but Portugal must play their best to qualify. After watching all their games so far, we have to say we’re with the Croatians on this one. If you want a value bet, try betting on Croatia’s victory and over 2,5 goals. Portugal will also probably score, but at the end of the day, the Croatians should prove victorious. The two teams seem the most powerful and in-form on this side of the table – maybe one of them will even reach the final. Regardless, we are eagerly anticipating the most spectacular clash in the round of 16. Betting Tip: Croatia To Win and Both Teams to Score – 6.50 or 11/2