What are the bookies offers for the World Cup Top Goalscorer betting market? What are the best odds for the Golden Boot winner and who is the most popular candidate?

Find out our betting preview and analysis of the candidates, their odds and chances to win the Golden Boot, the best sign-up bonuses and enhanced odds from recommended online bookmakers.

As much as football is a team game, certain individuals will always take the spotlight. Just think about it: would the rivalry between Barcelona and Real Madrid be the same if Messi and Ronaldo wouldn’t have a personal rivalry with each other?

At the end of the day, spectacular players bring fans to the stadium, make them pay for tickets, but kits, and encourage one team over another. Therefore, individual trophies are still a thing in the game – and we always remember the top goal scorer of the World Cup. Betting on the top goalscorer of the World Cup has also been around for tens of years, and that will be our topic of the day. 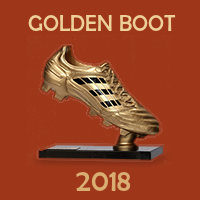 World Cup betting has an extra dimension by betting on these individual titles, like top goal scorer. Let’s just look at the long tradition of this title, and the huge players who’ve won it over the years.

We can’t wait to see whose name will complete this list after the 2018 World Cup. We also want to shoot some ideas about a few of the favourites to win the title, as well as a few things which make or break the top goalscorer.

Where To Bet On Top Goalscorer? The Bookies Favourites

That being said, we’ll jump right into the bookmaker’s favourites for the title of World Cup 2018 top goalscorer:

Argentina played the final at the last edition of the World Cup, and they surely want to win this edition. It might be Messi’s last World Cup, and he stated that he wants a trophy with his national team before retiring.

He will be motivated 110% at this World Cup, and we all know what Messi can do at the top of his game. The only issue with him is the fact that he has quite a few other players around him who score goals, like Aguero, Higuain or Dybala, just to name a few. He will have to share the spotlight. Odds to win and sign-up offer:

The Brazilian has lived in the shadow of Messi long enough. He moved to PSG and became the leader of that squad, and is now often linked to a transfer to Real Madrid.

His current form in the national team is awesome, and he scores goals from every possible angle. Unfortunately for him, Brazil is 100% reliant on his game to be able to win games. If they do go far this year, Neymar is a very solid choice for the Golden Boot. Odds to win and sign-up offer:

The consensus is that France will have an awesome World Cup tournament, possibly going all the way and winning it. They surely have to propose a name for the Golden Boot as well, and who can be better than Griezmann for this?

He played exceptionally well at Euro 2016 and can score from any position. His main issue is that inconsistency of his team. France can easily go 6-0 today and draw 1-1 tomorrow against a minnow. If they surpass this weakness, Griezmann is a great pick for top goal scorer. Odds to win and sign-up offer:

Portugal isn’t a big favorite for the competition, but Ronaldo surely won’t care. It’s most probably his last chance to play at a World Cup, at least until he’s at the top of his game.

He’ll score goals in the group stage and in the first games afterwards, until the Portuguese get eliminated – but we can easily see him scoring 4 or 5 during the group stage, especially since he does have two weak teams to score against. Odds to win and sign-up offer:

Possibly, the most complete and in-form pure striker at the World Cup, but a choice we don’t really agree with.

Bookmakers seem to consider Kane for the Golden Boot, but no England footballer has ever won this title – and Kane won’t be the first. He suffers from playing in an unstable team, and we can’t really see him winning this title. Odds to win and sign-up offer:

Not an incredible striker by any means, but if we remember correctly, neither was Klose. He just benefited from being a great finisher playing with awesome footballers around him, which is why Werner is in this competition as well.

Germany is one of the favorites to win this year’s tournament, which is why Werner will score goals. Odds to win and sign-up offer:

The equation behind Gabriel Jesus’ nomination here is simple: someone else has to score goals also in the Brazilian side, if Neymar creates them – and that person will be Jesus. Odds to win and sign-up offers:

The last football we analyze by name is a stretch, but is the most believable stretch. Belgium have lots of arguments on paper to have an incredible tournament, and Lukaku might just shine and score goal after goal. Odds to win and sign-up offer:

Players like Aguero, Cavani, Suarez, Higuain, Lewandowski, Muller, Costa or Giroud have one or more issues which we simply cannot get past. Some aren’t the main goal scoring threat of their nation, others simply won’t play enough games at this World Cup. Either of them winning the Golden Boot would be a huge surprise from our point of view, but not one we wouldn’t enjoy.

How To Choose The Best Candidates?

A few things you should consider when picking your favorite are:

– Opt for players who play for good teams – they’ll be in the tournament longer and have more chances to score goals. The likes of Lewandowski, Suarez or Kane are often ignored for this particular reason: they simply don’t play enough games at the tournament to be able to shine.

– Players who are designated spot kick takers and free kick takers also have more ways to score. Ronaldo is one example – although Portugal is not a tournament favourite, Ronaldo scores goals from spot kicks, free kicks, corners, actions, long shots, anything really.

– The fewer footballers with big egos there are on a team, the more chances one has to win top goal scorer. This is one of the problems Messi has – too many stars around him.

That being said, we’re looking forward to seeing how all these players will fare during the World Cup. We recommend placing at least one bet on the top goalscorer of the competition, especially if you still have free bets or other welcome bonuses lying around. This will make the entire competition much more enjoyable to watch, and an awesome overall experience.

Betting odds are presented at the time of writing. Please check them with the respective betting site. *T&Cs apply to all betting offers and sign-up bonuses. 18+, please gamble responsibly.