Many people compare Copa America 2016 with the European Football Championship – and wrongly do so. The only thing the two competitions have in common (besides only featuring national teams) is that they take place in roughly the same period of the year. Apart from that, the two are very different. The American competition features nations from both the CONCACAF (6) and the CONMEBOL (10). These teams are divided into 4 groups of 4 each and battle for the trophy which will be awarded on the 27th of June. Since the competition has already started, we’ll jump right into the hassle. 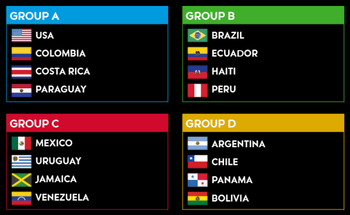 Group A is confortably led by Columbia, with 2 wins, and feature and interesting fight for 2nd place between USA and Paraguay. The two teams will play each other in the last fixture of the group, where the Americans just need a draw to ensure they will participate in the last 16. Betting 1X and under 2,5 goals in this fixture seems fairly sure, while Columbia’s victory against Costa Rica is also quite easy. USA is also the host nation of this year’s tournament – all the more reasons to see them qualifying from the group. Group B is not that easy – Peru won against Haiti in the opener, while Brazil and Ecuador drew 0-0. Brazil is left without star player Neymar at this competition and have a hard time scoring goals without him. Nevertheless, they should qualify from the group and need some wins to do so, wins which they will probably take from the games against Haiti and Peru. Bet on a Brazilian victory there, as well as an Ecuadorian victory with Haiti, and keep a good eye on the game between Peru and Ecuador. It will probably feature few goals and many yellow cards. Group C has 2 clear favorites – Mexico and Uruguay – which clashed in week 1. The game ended 3-1 for Mexico, which currently top a group which also features Jamaica and Venezuela. These teams are generally seen as sparring partners for the first one, so we should see victories for Mexico and Uruguay in next games. Group D seems very much the same as group C – Argentina and Chile are big favorites and Bolivia and Panama won’t be able to put up a fight. Argentine beat Chile in the opening game, so the Chileans know they need 2 more victories to qualify, which they will probably get over the next 2 games – just like the Argentinians.

Speaking of Argentina, it has to be said that they are the favorites of this year’s competition. Brazil lacks some key players, while other strong nations like Chile, Uruguay or USA don’t seem to be able to match the Argentinian side. If they manage to treat every game with the importance it deserves, they should be able to win the competition with relative ease, even without playing their best. Overall, the Copa America is known to be a spectacular tournament, so we’ll probably see goals, especially after the group stage. A better analysis will, of course, be done after the group stage, when we’ll know which are the 8 teams battling for the final trophy. After 3 games played by each, we can analyze each team’s style of play and form and make much better assumptions going forward.