With just 34 days to go until the start of the European Championship, fans, players and bookies alike are watching all the teams’ activity closely to figure out who is prepared for this great footballing celebration and who is not. More often than not, success in such a competition comes down to the smallest of details, although these days are not about small details – they are about selecting the 23 man squad which each team will bring to the championship. After Group A and Group B, we will now focus on the 4 squads which will battle for the 2 (or 3) qualifying spots that lead to the Knockout rounds of Euro 2016. Group C is led by World Cup winners Germany, which is accompanied by Poland, Ukraine, and Northern Ireland. Euro 2016 Group C has a clear favorite (Germany) and a clear outsider (N.Ireland), which means that the game between Ukraine and Poland will likely decide the team which will finish second. Let us continue with the analysis of the teams: 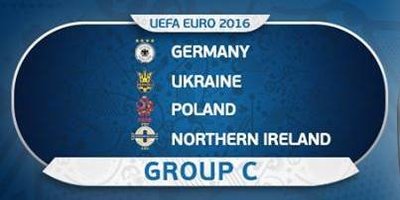 Germany – 4.50 The Germans are the typical strong team – coming after a recent World Cup win, viewed as the main favorite of winning UEFA Euro 2016, with a squad full of talent and experience. The only downsides of this team are a lack of world-class central midfielders (Khedira and Schweinsteiger don’t belong into this category anymore) and maybe a lack of motivation due to the recent triumph. Their objective is no more, no less than winning Euro 2016. Ukraine – 101.00 Ukraine was part of a 7-team qualification group and finished with 7 wins, 2 draws, and 3 losses. Their team has lots of quality, especially in midfield and attack, with Iarmolenko being one of the most wanted players in Europe at the moment. They are only at their second European Championship, but the first for which they qualified, since in 2012 they were co-hosts. They only managed 1 win in the Group Stage then (2-1 vs. Sweden) and know they need at least one more to ensure second place this year. Poland – 51.00 The Polish team is looking for their first win at a European Championship. They’ve participated on 2 occasions so far (2008 and 2012) but failed to win a single game. Led by the great Robert Lewandowski, Poland was part of the same qualifying group as Germany, and even managed a 2-0 win over their neighbors, the first in 19 games. A similar feat in the Group Stage could open their way towards the Knockout Rounds. Northern Ireland – 401.00 Winning a qualification group which was arguably the weakest (Romania, Hungary, Greece, Faroe, Finland), Northern Ireland is set to make their first appearance in a European Championship. Dealt in a very tough group, Gareth Bale, and his colleagues are told to enjoy the ride and the experience and try to not finish with any points. Any win will be considered as an upset for the small country.

Germany is one of the favorites to win the entire tournament, so they are also favorites in winning the group. They are also a team which scores lots of goals – combine this with the fact that none of the other teams is very impressive in defense, and you will surely get spectacular games and betting wins. Robert Lewandowski is also a good bet as a goalscorer while Northern Ireland probably won’t score more than one goal in any of their games. Overall, the question this group has to answer seems to be very clear: who will accompany Germany in the Knockout round? If Poland and Ukraine and to qualify together, the recipe is simple: Good games vs Germany (with points or not conceding a lot), a draw between them and big wins over Northern Ireland.