With Euro 2016 fast approaching, journalists from all over the world are trying their luck at predictions regarding how far each team will go in the European Championship. The first squads have already been named, and although 5-6 names will be dropped from each list, we’re starting to get a feel for how the contestants will look in this great competition. We continue our group analysis with EURO 2016 Group E, one of the most interesting in this year’s competition, with Belgium, Italy, Republic of Ireland and Sweden competing against each other. 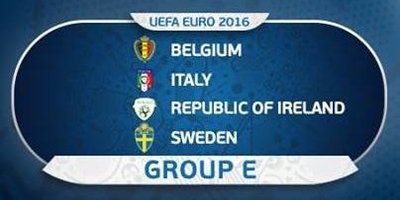 Belgium is one of the most acclaimed nations in this year’s tournament and is widely perceived as the most probable to produce a great upset. This generation of players is, by far, the most talented in all Belgian history: Hazard, Fellaini, Lukaku, De Bruyne, Witsel, Company, Nainggolan, Courtois – a veritable dream team. They’ve finished 1st in a relatively easy group, only conceding 5 goals and have set a very bold objective for this year’s European Championship: reaching the semi-finals for the first time in many, many years.

Italy qualified for this year’s championship in traditional fashion for them – with minimum effort. Topping their group with 7 wins and 3 draws, scoring 16 goals and only winning by a larger than 1-goal margin 2 games (2-0 against Norway and 3-1 against minnows Azerbaijan), this year’s squad seems unable to compete for glory. Although featuring exceptional players from teams like Juventus, Napoli, Roma, along with Inter and AC Milan, Italy currently seems like a group of individuals and not a team. They will fight Belgium for the top spot of the group but aren’t widely perceived as hot favorites for this year.

The Republic of Ireland didn’t manage a single point in their last Euro participation, finishing with 3 defeats. They managed to finish 3rd in a hard group with Germany, Poland and local rivals Scotland and beat Bosnia 3-1 on aggregate to qualify for the final tournament. Seen as the weakest team in the group, Ireland will surely rely on the likes of Shane Long, veteran John O’Shea, and Robbie Brady to lead the team to some good results.

Sweden also finished 3rd in a group with revelation Austria and Russia, although they were viewed as the main favorites to win the group. The team is built around star striker Zlatan Ibrahimović, who netted 11 goals in the qualifiers and will lead the team in which is probably his last major tournament at international level. Sweden beat local rivals Denmark 4-3 on aggregate to book their tickets for France and will be looking to at least exit the group, anything else being viewed as sub-par for the Scandinavian squad.

EURO 2016 Group E of this year’s European Championship will almost surely feature great football and many goals. Italy are no longer a team that only relies on defense, while the other ones are all known for quality, attacking football. Belgium should beat Ireland and Sweden easily and probably draw with Italy while the direct game between Ireland and Sweden should produce more than 2 goals. Also, Italy won’t probably score more than 2 goals in any of their games. Shane Long and Zlatan Ibrahimović are the main attacking threats of the group, alongside Lukaku, and they should all score at least once if not more. The games of this group are, without a doubt, some of the most widely anticipated of this year’s tournament. The first game it between Ireland and Sweden at Stade de France on the 13th of June.