With a little over a month till the start of  UEFA Euro 2016 and with most of the European leagues over or virtually over, people have started paying more and more attention to the participants of Euro 2016. The championship will start on June 10th, with the final being scheduled on July 10th, and will take place in France. The groups have already been settled as of December last year. This year is the first time when 24 teams will start the race, which will surely provide more interesting games to watch. Today, we will focus on the composition and games of Group A, which traditionally is the group the host country plays in. This year, Group A is composed of France, Switzerland, Romania and Albania, and will schedule the opening of the tournament on June 10th, with a game between France and Romania. It is worth mentioning that France is among the hot favorites for winning the tournament (along with world champions Germany and holders Spain) while Albania is a complete debutant. 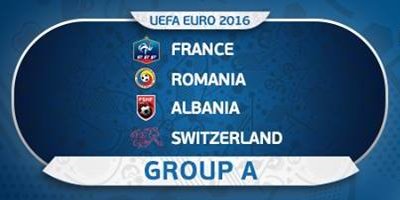 France – 4.20 The host nation requires little introduction. They managed to win the tournament twice in their history, in 1984 and 2000. France will start with a game with arguably the toughest adversary in the group, Romania, at Saint-Denis. Les Bleus are viewed as one of the best teams in a tournament and feature an excellent generation of players, led by the likes of Lloris, Pogba, and Griezmann, just to name a few of their star players. France is widely considered to name no problem winning the group with 7 or 9 points. Switzerland – 67.00 Ending their qualification group with a tally of 7 wins and 3 losses, Switzerland qualified with relative ease. Led by leading scorer Xerdan Shaqiri, who had a formidable season with Stoke City, Switzerland will fight for second place in the group with Romania. They have only managed 1 win in all their participations in European Championships (a 2-0 win over Portugal) and never exited the Group Stage. This year might be their chance to appear in the Knockout rounds for the first time. Romania – 201.00 Romania had the best defense among all European teams, only conceding 2 goals over the course of the 10 qualification games. They finished 2nd in their group behind Northern Ireland and feature a squad without many star players. Their captain, Vlad Chiriches, and goalkeeper Ciprian Tatarusanu are the only regulars in above-average European clubs. Generally viewed as a very tough nut to crack, Romania will battle for a place in the Knockout rounds with the Swiss. Albania – 501.00 Albania is by far the most surprising team of this year’s edition. They never managed to qualify for a final tournament before and surely won’t disappoint anyone if they fail to qualify from the group stage. The lack of pressure could lead them to play good football, just like they’ve shown in their best win of the qualifiers, a 3-0 win in Yerevan against Armenia.

From a betting perspective, the online betting sites view France as the favorite to win the group, with Romania and Switzerland having more or less equal chances to finish second. Games where the Romania feature will probably feature few goals, while France – Albania could be a game where the host team will score quite a few. A draw between Romania and Switzerland is also fairly probable, and the deciding factor might be their results against France. All in all, Group A of this year’s championship is sure to feature some very exciting fixtures, and might very well be the chance to see this year’s winners (France) in action for the first time.

GET THE BOOKIES FREE BETS HERE→